It occurred to me, in discussion with EquippedCat and Steve Ruis in early December 2016, that exploring human judgements in objective areas can illuminate some of the discussion that happens around morality and whether it is, too, is objective. The ‘objective area’ I want to look at to help illuminate why morality is also objective is ‘space’.

I believe morality is both empirical and objective. The quality being measured―thus making it empirical―is the mind, and the ruler (at principle, at least) is something like an fMRI machine which can measure changes in the brain, which relates directly to the mind. The principle here is that ‘morally good’ actions are those that safeguard wellbeing (or, at least, intend to safeguard wellbeing).

The contentious part of this model doesn’t appear to be the relationship between the brain and the mind, or the fact that―in principle―knowing the state of the brain tells one about experience in the mind. Some of the contention arises from questions about what exactly ‘wellbeing’ is, but that concern seems to be alleviated by discussing the fact that some experiences really are worse than others. The bottomline contention seems to be idea that calling ‘changes in wellbeing caused by intended actions’ and ‘morality’ identical is merely a subjective or arbitrary metric. And so it is that concern I’d like to address here.

Imagine you were tasked with the challenge of describing two points in relations to each other. It seems rather simple: you may want to just measure the straight line between the two points. It is simply a question of their distance apart (fig 1.1). But consider figure 1.2, taken from Google Maps, which shows the ‘network distance’ (distance along the road) between the same two points.

Google Maps shows 3 different distances, with varying times. This starts to allude to something interesting: the linear distance, although objectively and empirically true, isn’t relevant and neither is the network distance (else why would there be three routes offered?). The mention of time and another bit of information from Google (fig 2) implies something more important than distance: impedance.

Impedance is a measure of many things. It includes distance and time, as well as other costs (like tolls), current traffic, and for a fully laden lorry, even relief. In fact, lorries also need to know about road restrictions and speed limits. The factors that inform an ‘Impedance Index’ are all objective. But navigating the increasingly nuanced picture of which measure is relevant is clearly human judgement, even though it is all objective. And even this increasing nuance is simply increasing the complexity (but also the utility, arguably) is only a linear progress of simply that problem: navigation by the roads.

So, what if your task of describing the distance between points is actually one of building a high speed railway between the two points? For that you may need the map in figure 3 (although it wouldn’t be all you need). 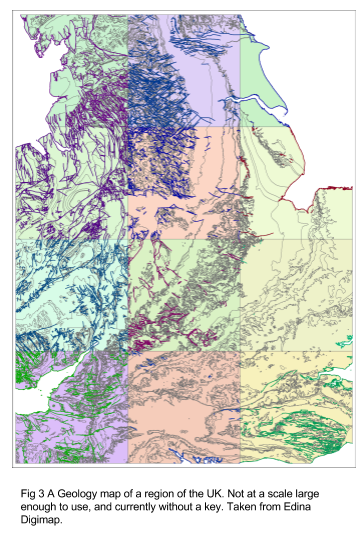 If you want to build the High Speed Rail service between Manchester and London, the description you want between the two points is geology: the relief of the land and the qualities of the rocks (especially where you may need to build a tunnel). But again, it is human judgement and utility that dictates which objective and empirical measurements you need.

I should reiterate a point about morality, one that I alluded to in the introduction and have mentioned in previous posts: I do not believe there is anything about the universe that means morality is inherently in the fabric of the universe. Instead, objective morality emerges from the fact that conscious beings can make intended actions, affecting the wellbeing of other conscious creatures.

I appears I’m simply jumping from logistics of travel between Manchester and London and morality, I am aware of that. But it does have a purpose: in exploring the simple task of describing the relationship between two points, we found that there is a lot of room for human judgement without ever leaving the realm of objective and empirical measurements; similarly, in exploring morality, I think, we can see that making a few judgements doesn’t detract from morality being objective.

In exploring the very narrow question of the relationship of two points, many judgements had to be made. In exploring morality, which is a question of a realm that emerges from consciousness and intent, there are still judgements to be made. And it is that process that I often find discussions stumble on: people seem unwilling to entertain judgements about what makes this measureable. The utility of making judgements about what needs to be measured in the ‘logistics’ example we explored first doesn’t appear controversial. Yet, the fact that this makes sense in simply exploring space, the discussion from people who doubt that morality is (or can be) objective appears to refuse that more complex questions would require judgements like simpler ones do.

There are woolly and yet still objective judgements that are made in a similarly complex area: health. Objective measurements made on different organs and the body do give a sense of health, even though health itself is poorly defined, and the benchmark for ‘good health’ keeps changing (especially  what constitutes good health in old age). However, arrows of health (which way is ‘better health’ and which is ‘worse health’) are not contentious: would you be better off drinking milk or battery acid?

You may argue that health is irrelevant to the universe or a human construct. But neither position stops health being objective. And I’d argue, again, the same is true of morality; wellbeing may be poorly defined and the benchmark for being ‘happy’ may increase as quality of living increases, but arrows of wellbeing are aren’t so contentious: would you be happier spending the next year living a social life or in solitary confinement? You may even argue that the human judgements that tie morality to wellbeing make the whole endeavour subjective, but that doesn’t seem to apply to simple questions, like space, or other complex questions, like health.